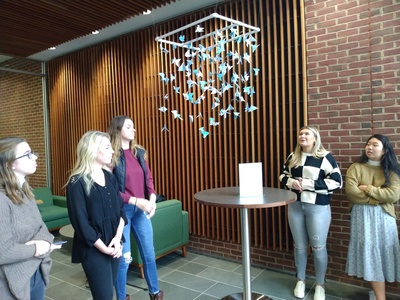 Design and psychology are closely linked. One image can be seen through multiple lenses by different viewers, but everyone develops their own perception. This idea of visual perception is what the Gestalt Theory is all about. According to Stephen Pentak and David Lauer, authors of a book titled, Design Basics”, “The designer’s job in creating unity is made easier by the fact that the viewer is actually looking for some sort of organization, something to relate the various elements” (pg. 32). We put this theory into action with our project. Demonstrating motion with static elements proved to be a challenging task. However, we were able to create a visual representation of unity and proximity, nonobjective construction, perceived movement, and repetition.

Throughout our design, there is a noticed common theme and unity. The origami birds are all very similar in their design and construction. This construction was nonobjective because the shapes of the birds are all very similar but different in their own way. Each group member followed the same directions when creating the individual birds. However, since done individually, there were subtle alterations in the birds due to everyone creating the shapes separately and at different times. This factor could have been a potential downfall, but instead added an element of charm and uniqueness. Another element applied was perceived movement. When looking at the design, the birds seem to be flying. It is true that the origami shapes can be moved, but even when static that same message is conveyed. This assumption relates to the viewer’s psychology in that they use past knowledge and visual representation to create movement in their minds. The last Gestalt principle represented is repetition. By having multiple birds, the theme of motion is emphasized on a larger scale. This addition makes it easier for the viewer to understand theory in action. Overall, our group created a design that was balanced nd unique. By using elements of the Gestalt Theory, we were able to engage the audience and foster visual perception.