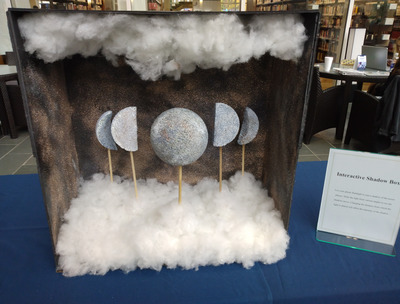 For this project, our group designed a shadow box that requires interaction to receive the full effect. The project is a galaxy theme and casts shadows of moon phases. The interaction comes into play when casting the actual shadow. When someone interacts with the shadow box, they are to use the flashlight feature on their phone and shine it at the moon phases. Various shadows can be cast depending on the angle at which the light is pointed. The moon phases were created with Styrofoam spheres that were cut according to the moon phase and held up by wooden dowels. The shadow is cast on a black styrofoam poster board that is decorated with stars to add to the galaxy theme.

Use your phone flashlight to cast a shadow of the moon phases. Shine the light from various angles to see the shadows move. Changing the distance from which the light is shined will affect the intensity of the shadow.