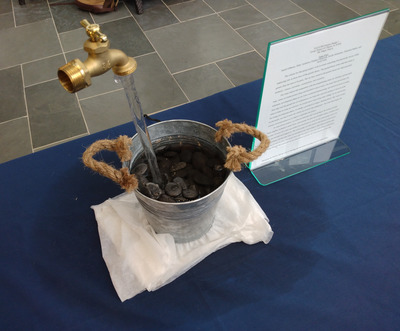 The criteria for this group project were to create something that physically moves while employing one or more laws of the gestalt theory. The gestalt theory states that the whole is greater than the sum of its parts. The six laws stated in the gestalt theory are figure-ground, similarity, closure, proximity, continuation, and symmetry.

Our team started this assignment with the programming phase by creating a group mind map, where we brainstormed ideas and decided to move water. Our team then moved into the schematic development phase as our team continued brainstorming and narrowed down the using clear pipe and the gestalt law of continuation: our team also used the internet to look up some ideas to help us come up with how would move water using clear tubing. As we moved into the design development phase, we finally concluded on using a floating faucet. The water would be physically moving to meet the criteria set forth in this assignment. Our team then began the contract document phase as we began to assemble the project.

To start off our project, we collected materials that were going to be needed to build. Those supplies included a metal valve, water pump, hot glue gun and glue sticks, a bucket, and a clear tube. To start off, a hole was drilled into the bucket in order for the water pump cord to be able to run through and plugged in. The water pump was then glued to the bottom of the bucket to keep it sturdy, and the clear tube was attached to the water pump s that water would be able to filter up through the tube. The metal valve was then glued to the clear tube where a small hole was placed so when the water goes up the clear tube, it will also run down the sides of the tube. This gives the illusion that the valve is floating, and the water is pouring out of it with nothing attached to it.