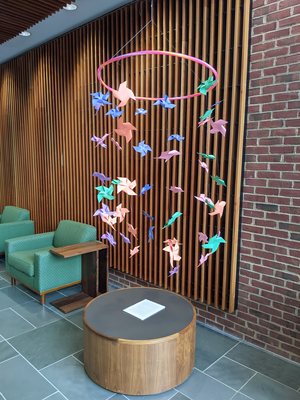 We were given the assignment of creating a project that physically moves while celebrating one or more of the tenets of Gestalt Theory which states that the whole is greater than the sum of its parts. Our team decided to begin the project by creating a mind map. Because the assignment required the piece to move, we chose to put the word "movement" at the center. We then began to slowly branch off from this idea and ended up having two options to decide from. We all agreed that manipulating either wind or water would be the best way to allow our project to move without an outside force so that people walking in the Jerry Falwell Library would be able to view it as a finished product. Our ideas involving water as the main force ended up being too difficult to achieve because they would cost more to create. This narrowed us down to wind, but we were still unsure of how exactly this would be accomplished.

Once the movement portion of our project was determined, our team moved to the design development stage where we began to research and sketch out our ideas on paper until we came up with our final design. We decided to create a piece of work that would contain a considerable amount of different colored pinwheels made of construction paper that would attach to fishing wire hanging from a hula-hoop. Since the piece itself would take up a decent amount of space, we knew that we needed to have it in a space where there would be room to walk around it and still view it from all sides, including underneath and potentially from the inside. This meant we would need to attach it in an open area from a significant height. We had already established that the pinwheels would spin on their own without any extra air flow, but we preferred that the structure still be located near another source of wind (i.e. an air vent).

The most important portion of the project was to make sure it demonstrated at least one of the tenets of Gestalt Theory. The principle our group chose to illuminate in our piece was the Law of Similarity. This law states that our minds often group similar items together within a larger form to create an arrangement of continuity. Considering that similarity can be recognized by the shape, size, and/or color of the piece's individual segments, our team chose to examine the influence color has on the viewer's mind when observing the structure as a whole. We decided to build our pinwheels out of five different colors and strategically placed them in lines extending from the hoop in a way that makes it possible to view them as different patterns or continuous lines. Although at first glance the varying colors of the pinwheels seem to prevent them from appearing to be related at first glance, the repeating pattern of similar objects makes each strand form many continuous lines, creating continuity in the whole piece.