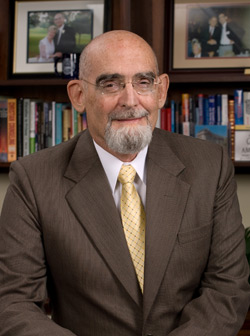 Ronald Godwin was born on May 6, 1937 in Pensacola Florida. He attended Baylor University, Bob Jones University, William and Mary, and Florida State University. He taught in Christian education in Florida and was the headmaster for a school in Panama City. He was the President of Clearwater Christian College and came to Lynchburg to work with Dr. Jerry Falwell in 1978. Mr. Godwin ran the Washington D.C. office of the Moral Majority and had many speaking engagements as a representative of the Moral Majority. He founded the Liberty University School of Life-Long Learning, served as President of Jerry Falwell Ministries and is currently the Vice-Chancellor of Liberty University.