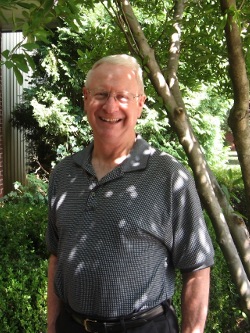 James Borland was born on July 11, 1944, in Santa Monica California. He attended UCLA and Los Angeles Baptist College and received his Th.M. from Talbot Seminary in California. In 1976 he earned his doctorate in theology from Grace Theological Seminary. He came to Liberty University in 1977 and has taught in the School of Religion and Seminary. He has contributed in writing the Liberty Bible Commentary and has been a Wednesday night speaker at Thomas Road Baptist Church. He has been the President and the Secretary-Treasurer of the Evangelical Theological Society. Dr. Borland is currently a professor of Religion at Liberty University.